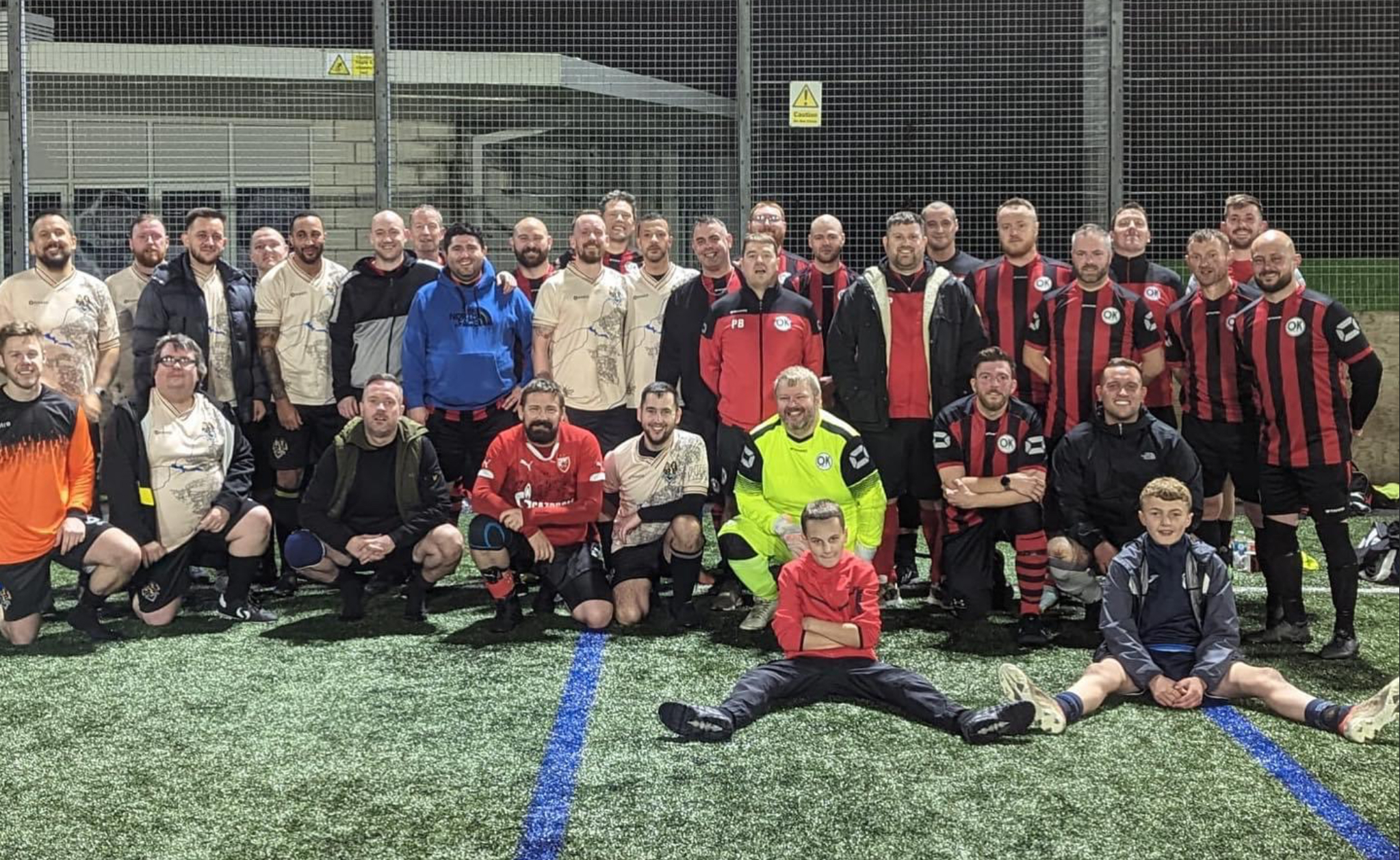 Under the floodlights on a crisp Sunday evening in Lancashire, Old Knackers FC and Happy Somedays played out an enthralling 4 – 4 draw.

The two teams, made up of Over-35’s and one very much Under-35 goalkeeper, raised money for Beside You InBereavement during a fixture played at Penwortham Priory Academy in very much the right spirit and amongst a lot of laughs.

Happy Somedays, the visitors from Manchester, started the stronger of the two sides and raced into a two-goal lead early doors in the first half with the spritely strikers running onto superbly weighted through balls from midfield. Andrew Sidgreaves reduced the arrears for Old Knackers FC before Paul Bailey finished with aplomb to bring the score back to a Desmond (2 – 2) at the interval.

Paul, well known for his sportsmanship, had also blocked a goalward-bound effort as the ball struck him between the shoulder blades from an OK FC strike to ensure the score remained level heading into half-time.

In the second half, substitute Wayne Ormerod notched two goals as the lively forward moved Old Knackers into what appeared to be an unassailable lead.  That was until Happy Somedays earned the chance to get one back from the penalty spot late in the game as Sam Worden conceded a contentious penalty, awarded by referee Matt Harrison.

Keeper Stokoe almost got a foot to the penalty, it nestled in the back of the net courtesy of the Happy Somedays captain, which brought the scoreline to 4 – 3.

Happy Somedays earned their equaliser with a long-range effort that caught goalkeeper Paul Stokoe off his line in the final moments of the game which fittingly ended with eight goals shared evenly between the two teams.

The Old Knackers FC Player of the Match went to goalscorer Andrew Sidgreaves, making just his second appearance for the side following a bout of injury. Old Knackers have been blessed to form such strong bonds with sponsor Lancashire Tea, Andrew earned a box of Lancashire Tea and an Old Knackers mug courtesy of The Terrace for his efforts. Both James McAlpine and Lee ‘Mango’ Mangan made impressive eleven-a-side debuts.

Old Knackers FC, based in Preston, are an Over-35’s charity team, supporting mental health awareness and providing a platform to build fitness through football during weekly training sessions and monthly matches.

Happy Somedays from Manchester promote football free from stigma, all abilities are welcome as they host training sessions for both men and women along with fitness boot camps.

Both teams play matches to raise money for worthwhile charity causes, Sunday’s chosen charity was Beside You InBereavement, a peer group for local people affected by suicide. Sessions are held in Buckshaw Village and for more information contact CAD@lscft.nhs.uk or call/Whatsapp07973 782833.